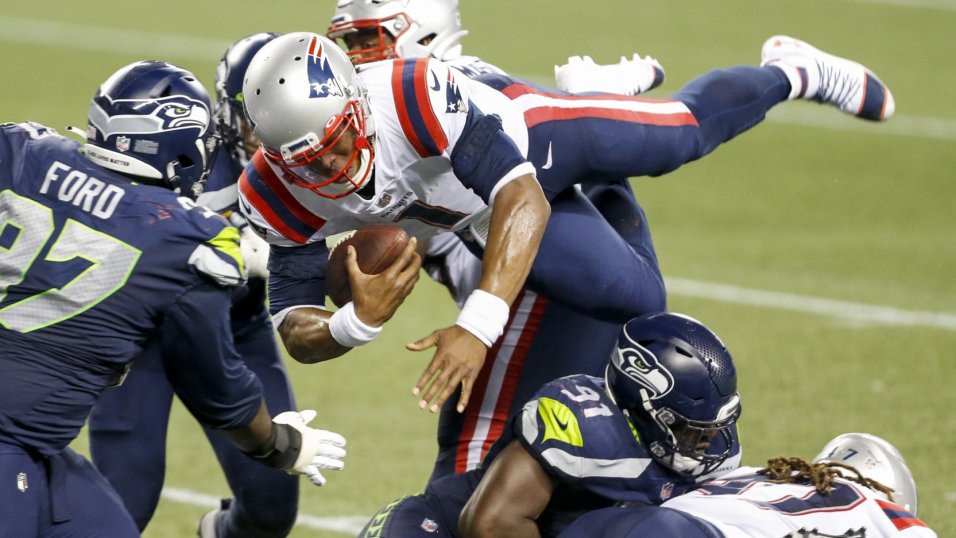 When you put these words together, you’re bound to get one hell of a football game, and yesterday was no exception. For the third straight matchup between these teams, the game came down to a goal line stand by the victorious team, with Seattle securing a 35-30 victory. This loss drops the Patriots to 1-1 and second place in the AFC East behind the Buffalo Bills.

Here are my takeaways from this Week 2 game.

1. Cam & Jules came to play!
After lighting up the Dolphins on the ground in Week 1, many people wondered how Cam Newton & the Patriots would look when #1 was tasked with beating defenses with his arm. Newton delivered yesterday, as he threw for 397 yards, and almost led the Patriots to a dramatic fourth quarter comeback. Newton primarily connected with Julian Edelman, who totaled 179 receiving yards on a career night. For the first time in multiple seasons, Edelman was a deep threat, with several clutch catches against star safety Jamal Adams, including a 49 yard reception to spark a scoring drive in the fourth quarter. However, Edelman was visibly exhausted and dinged up near the end of the game, which is a situation worth monitoring as the season progresses. Other than Edelman, Damiere Byrd & N’Keal Harry both stepped up, as they both recorded 72 receiving yards. It was great to see Byrd step up after being held without a catch in Week 1, but Harry’s game was even more encouraging, as he made some tough contested catches, including a 4th down play in the first quarter, when he got hit illegally by a Seattle defender. Cam Newton has expressed confidence in Harry, and performances like this will only help expand his role in the offense.

The Patriots’ rushing attack was primarily run through Newton, as both Sony Michel & Rex Burkhead struggled to gain any traction. Newton recorded 2 rushing touchdowns on his now-signature goal line draw play, but it’s starting to look like that play may be becoming predictable for opposing defenses. This was evident on a failed two-point conversion in the fourth quarter, when Jamal Adams dispatched him through a gap in the offensive line. In addition, on the game’s last play, the Patriots opted to use that play again, which resulted in Newton getting knocked down a few yards short of the goal line. I’m not going to question Josh McDaniels’ decision making, as the play could have worked with better blocking, but an option play, or play-action pass in that situation could have helped the Patriots win the game.

To sum up New England’s offensive performance, it’s safe to say that Cam Newton was otherworldly (apart from a bad interception in the third quarter), as his dynamic playmaking made the offense look explosive for the first time in a long time. Almost beating one of the NFL’s best teams in a shootout on the road is an encouraging sign for the second showing of an evolving offense. As Newton & the skill players continue to become more comfortable with each other, the offense will only continue to get better.

The Patriots’ secondary was thought to be the team’s strongest position group, but they got absolutely annihilated by one of the NFL’s best quarterbacks in Russell Wilson, who threw for 5 touchdowns. Wilson only had 1 mistake the whole game, when a pass went through Greg Olsen’s hands, and was caught by Devin McCourty, who returned it for a 43 yard touchdown. Things went downhill from there, as Wilson targeted key members of the secondary, including Jonathan Jones & Stephon Gilmore, with both players giving up touchdowns. Typically, the Patriots stick to tight man-to-man coverage, but with Wilson’s elusiveness out of the pocket, they chose to use zone coverage, which didn’t really work out in their favor. The Patriots were able to sack Wilson twice, but they struggled to keep up with him, as he also gained 39 yards on the ground.

Seattle also had great success running the ball, with Chris Carson accounting for 72 of the team’s 154 rushing yards. The Patriots struggled to win at the line of scrimmage, which should be an area of emphasis for Bill Belichick as the season progresses. Luckily for them, Seattle opted to pass the ball on a crucial 3rd & 1 near the end of the game, which ended up with an incompletion, and gave the Patriots a chance to win the game.

Bill Belichick will likely be ruthless in his evaluation of this game, as his defense was routinely beaten by a blistering air attack, which is something that cannot continue as New England begins to play teams with high-flying offenses.

James White was inactive last night, due to the tragic death of his father, who perished in a car accident. White’s mother is also in critical condition.

Tributes for White poured into social media, and Devin McCourty chose to shout out his teammate after his pick-six in the first quarter.

Yesterday’s game marked the debut of the Patriots’ new away uniforms, which are a marked improvement over the previous set. Hopefully they’ll be more lucky the next time they wear them!

What’s next?: The Patriots return home to host the Las Vegas Raiders (2-0) for their first matchup since the 2017 season.