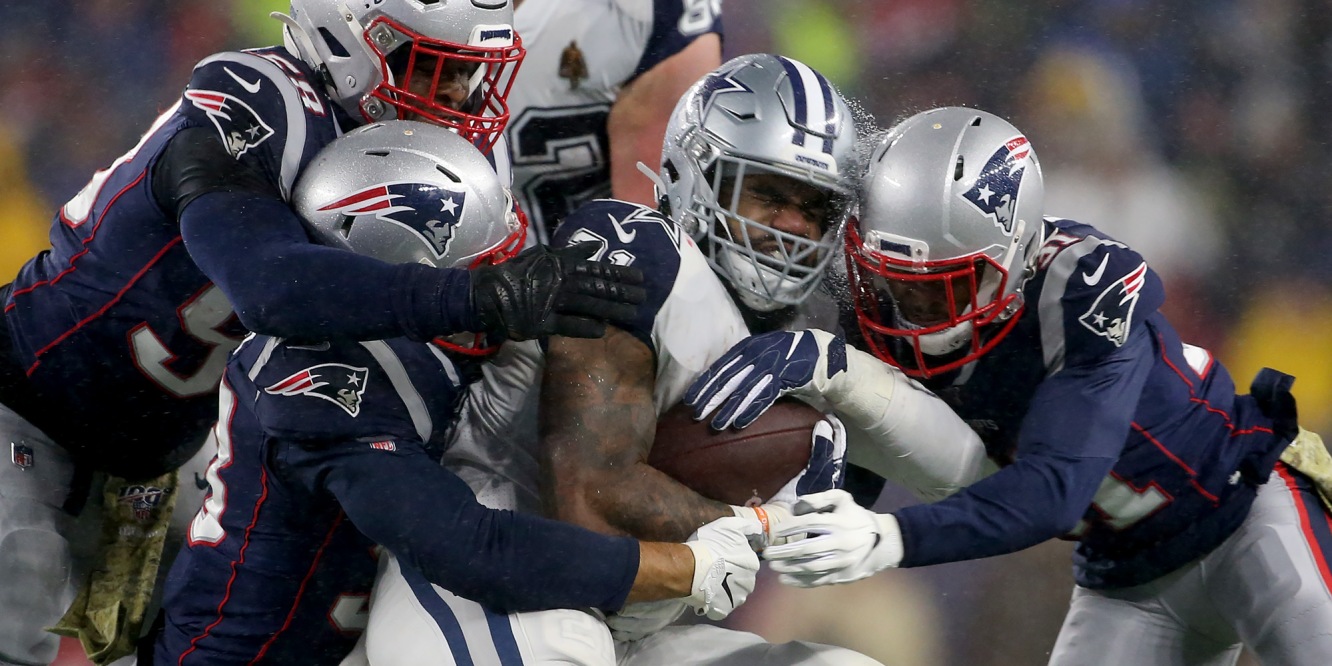 Yet again, the Patriots’ defense and special teams led New England to victory, as they prevailed 13-9 over the Dallas Cowboys (6-5) during a wet and cold afternoon in Foxborough.

This victory improves the Patriots to 10-1 on the season and keeps them atop the AFC through 12 weeks.

Here are some takeaways from yesterday’s game.

Bill Belichick’s defense came to play yesterday, as they absolutely stifled the NFL’s top offense and kept them out of the end zone. Dak Prescott entered this game with 3 straight 400 yard performances, but was held to 212 yards, without any touchdowns. The weather obviously had an impact on Prescott, as he was seen changing his gloves on several occasions, but the Patriots were able to take away his top weapon in Amari Cooper. Stephon Gilmore continued his campaign for Defensive Player of the Year by blanking Cooper, who was targeted only twice. Cooper’s first target resulted in a Gilmore interception that set up the Patriots’ second score.

Other than a 59-yard catch and run by Randall Cobb, the Patriots were able to limit big plays and mostly held Dallas’ secondary receivers in check. Due to the inclement weather, most analysts expected the Cowboys to utilize Ezekiel Elliot early and often, which was evident, as he averaged 4.1 yards per carry during a 86-yard performance. The Patriots will need to shore up their run defense, as rushing the ball will likely be a point of emphasis for opposing offenses.

2. The offense was efficient, if not explosive

In the eyes of many “experts”, yesterday’s game adds to the narrative that Tom Brady and the Patriots’ offense are no longer elite. Of course, these people won’t mention that Brady outplayed an MVP candidate in inclement weather, and did so without two of his top targets in Mohamed Sanu and Phillip Dorsett. The offensive line was fortified by the return of Isaiah Wynn, who shook off a rough start (which included a strip sack of Brady), en route to a group performance that was a far cry from the debacle in Philadelphia.

For the first time in several weeks, the team eclipsed 100 rushing yards, as Sony Michel accumulated 85 yards off of 20 carries. With the absence of Sanu and Dorsett, the Patriots got a major contribution from Jakobi Meyers, who had 4 receptions for 74 yards. Julian Edelman was his usual self, with 8 receptions for 93 yards, including a huge catch on 3rd & 20 that helped extend a drive in the second half. N’Keal Harry had his first professional touchdown on a fade route in the red zone, with his athleticism on full display. At the same time, Harry still has room to improve, as evidenced by a couple of dropped passes.

The Patriots’ offense still has a long way to go, as they cannot continue to depend on their defense and special teams to win them games as the season progresses. If Brady continues to build chemistry with Meyers and Harry, the Patriots should be able to have a solid 5 receiver rotation that helps take pressure off of Julian Edelman. In addition, Michel’s performance is something to build upon, as having a balanced attack will open up the field through play action.

Throughout this season, the Patriots’ special teams unit has been able to make momentum shifting plays, and yesterday was no different. Perennial All-Pro Matthew Slater added to his stellar season with a blocked punt in the first quarter that led to Harry’s touchdown. Jake Bailey wasn’t as effective punting the ball, as he did shank some punts, but he was able to pin the Cowboys on his last attempt.

As I mentioned earlier, special teams shouldn’t have to elevate the Patriots on a weekly basis, but it is definitely appreciated by Bill Belichick and the coaching staff when it does happen.

What’s next?: The Patriots head down to Houston to take on Deshaun Watson and the Texans (7-4) on Sunday Night Football.