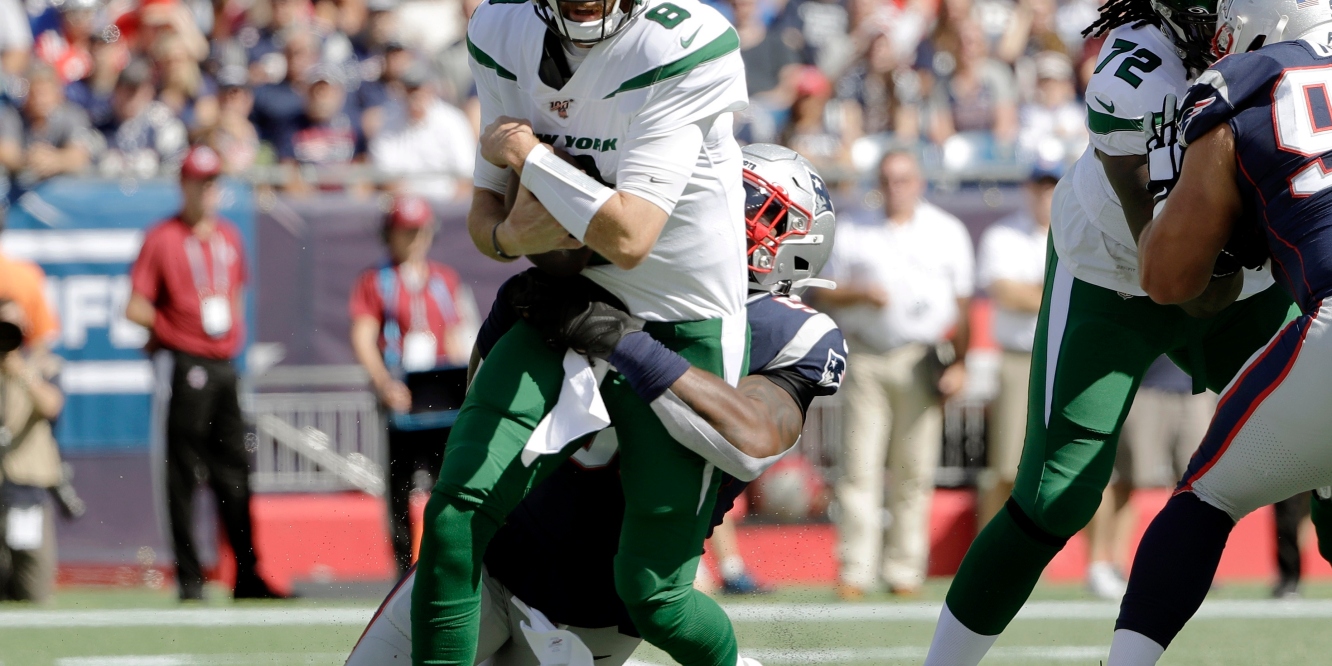 Today’s game was more of the same for the Patriots against the Jets (0-3) in Foxborough, as their dominant defense led them to a 30-14 victory. This win improves them to 3-0 on the season, with 2 of those wins coming against division opponents.

Here are some takeaways from this Week 3 victory.

1. Brady and the offense need to work on their rhythm

Tom Brady and the Pats’ offense started off hot, as they scored on their first three drives to take an early 20-0 lead, with #12 throwing touchdowns to Philip Dorsett and Julian Edelman. However, the offense began to sputter in the second quarter as their next four drives ended with punts. The Patriots also had their depth at wide receiver tested, due to injuries sustained by Edelman (chest/ribs) and Josh Gordon (hand), which gave Jakobi Meyers and Gunner Olszewski more snaps than they’re accustomed to. Edelman ultimately left the game, but early signs indicate that he didn’t suffer a serious injury.

#Patriots WR Julian Edelman suffered a rib injury that knocked him out of the game today against the #Jets, sources say. But X-Rays were negative. An early positive sign.

On the other hand, Gordon only missed a few snaps, and was able to make two jaw-dropping catches that helped the Pats move down the field. The Pats struggled to run the ball without James Develin in the backfield, and finished with a measly 68 yards off of 27 carries. Ironically, the Patriots’ offense gave up more points than their stingy defense, as backup quarterback Jarrett Stidham threw a pick-six to Jets safety Jamal Adams. Most viewers expected Brady’s day to be over when Stidham entered the game, but following the pick-six, Brady re-entered the game to finish it off.

The Pats’ offense was able to use their quick start to emerge victorious, but they will need to patch things up to be successful down the line.

2. The Pats’ defense was unbelievably good!

The Patriots’ defense turned in another efficient performance, as they limited New York’s offense to 105 total yards and 0 points. They were able to shutout their opponent in the first half for the fifth straight game (including the 2019 playoffs). Third-string quarterback Luke Falk was never allowed to be comfortable during his first career start, as the Pats constantly got after him, and registered 5 sacks and 10 QB hits. Falk finished with a mere 98 passing yards, and threw an interception to Devin McCourty (where the closest Jet was 12 yards away). Dynamic running back Le’Veon Bell was utterly stifled, as he registered 18 carries for 35 yards. New York’s leading receiver was ex-Patriot Braxton Berrios who had 2 receptions for 29 yards. Jamie Collins was arguably the best player on defense today, as he pressured Falk and was effective against the run.

The Pats’ defense has given up only 3 points through 3 games, and will undoubtedly be tested as the schedule begins to become more difficult over the next few weeks.

3. Special teams had costly miscues, and an amazing highlight!

Stephen Gostkowski missed another extra point today, with his miss coming following the Pats’ first score. He has missed 3 extra points on the season, which matches his previous career high. Gunner Olszewski was responsible for breaking the Jets’ touchdown drought in Foxborough, as he muffed a punt that was recovered for a touchdown in the third quarter.

On the other hand, Matthew Slater reminded the NFL why he’s still the premier special teams player in the league with a remarkable effort on a punt which pinned the Jets at the one-yard line.

Matthew Slater showing the world why he's a special teams ace. This is a thing of beauty. pic.twitter.com/xLSanSOxBb

Special teams will need to improve its performance for the Pats to continue winning, as they cannot afford to leave points on the field.

What’s next?: The Pats head to Buffalo, where they will take on the Bills (3-0), who are the only other undefeated team in the AFC East. Buffalo has won gritty games, with their young QB Josh Allen clearly taking a step forward over the last few weeks.